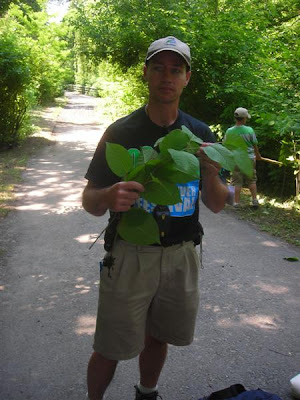 Damian Griffin, Education Director at Bronx River Alliance, is a former NYC Public School teacher who works to help teachers make the river an extension of their classroom, as well as coordinates the Bronx River Stewards Program and On Water Program. Griffin himself lives in the South Bronx neighborhood of Hunts Point with his wife and two children and has been a resident since 2003. After ten years as a carpenter, Damian joined the US Peace Corps as a Vocational Education Volunteer and decided to make education his focus.

He now holds a BA in English with a minor in Spanish from Baruch College, as well as a MS in Bilingual Education from City College. In 2006, he was chosen as one 20 Toyota International Teacher Program participants to travel to the Galapagos Islands to share methods of making environmental education a part of all disciplines. Damian is also a community leader, having served as a Board Member and Treasurer for Community Board 2 in the Bronx, and having recently been appointed as the Bronx representative to the Board of Directors of the NYC Soil and Water Conservation District. For the past three years, Damian has acted as a liaison between many of the scientific studies and restoration projects going on along the river, the scientists who manage them and the communities along the river. A large part of that work is “translating” the ongoing work into a form that will help to engage youth and community members while building a greater understanding of the importance of the work to the river ecology and the community as well. Damian is trained in DEC-managed curricula such as Project WILD, Project WET and Project Learning Tree, and has organized workshops to promote these programs to teachers and non-formal educators.